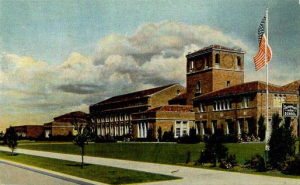 Established in 1856, Sacramento High School is the second-oldest high school west of the Mississippi.  First located at 8th and M streets, the school opened in a rented, one-room building with 39 students.  Sacramento High School moved several times before settling at its current location at 34th and Y streets in 1924.  This site originally housed a set of two-story brick buildings anchored by a clock tower.  In 1976, the modern, earthquake-safe campus used today was completed.

For years Sacramento High School was the only high school in Sacramento and it grew to be quite large.  At its peak, the school accommodated 4,000 students.  With the opening of C.K. McClatchy High School in 1937, Sacramento High School’s student body was split in half, an action that initiated the friendly rivalry the two schools enjoy to this day.  The annual Thanksgiving Day football game between the two schools was, for a long time, one of the best-attended events in Sacramento.  The coveted “victory bell” continues to be the trophy held by the school winning the annual Sac High-McClatchy football game.

On September 2, 2003, Sacramento High School opened as an independent public charter school managed by St. HOPE Public Schools.  Building on a century and a half of rich tradition and heritage, the mighty Dragons continue to proudly display the purple and white school colors and their unrivaled school spirit.

At Sacramento High School, the motto is “Service for Others.”  Through community service, students develop a strong sense of civic responsibility while giving back to the community in which they live.