Sinbad’s Humor Therapy: There’s A Grain of Truth In Every Joke 2015 Speaker Series 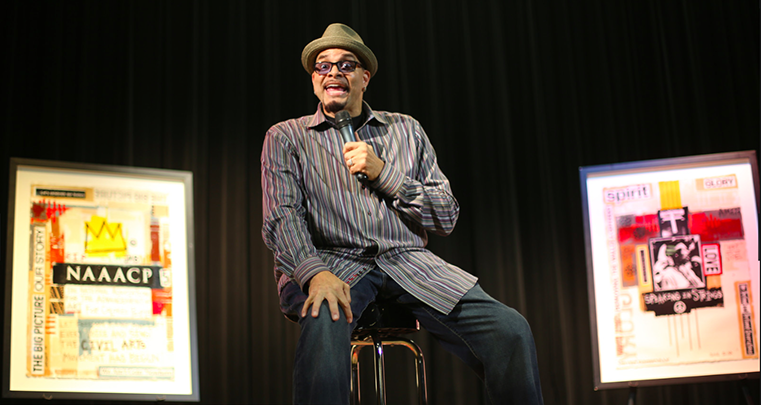 In the case of comedian and actor Sinbad, that grain [of truth] looks more like a monolith, especially if you ask those who were able to take part in the first installment of Indivizible’s 2015 Speaker Series.

Although the mood was a bit lighter than most Indivizible meetings, Sinbad had the ability to keep Indivizible members grinning, from ear to ear, as he shared a few important life lessons that stuck with him over the years. While most are detoxing and taking part in their New Years Resolutions, Indivizible made an effort to help Sacramento press the reset button on life with some good old fashioned humor therapy.

One wouldn’t expect for a comedian to be so well versed in community and civil rights issues and one certainly wouldn’t dare think that you could find a funny side from such themes. Lo and behold, Sinbad was the perfect man for the job, as he took members back down memory lane, exposing a few uncomfortable truths behind some rollicking comedic material. 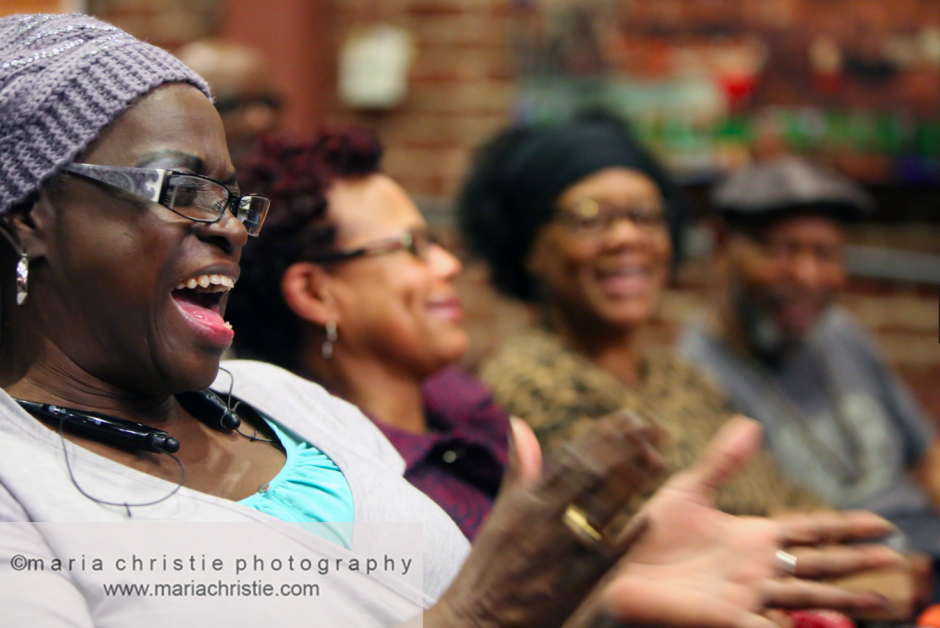 Sinbad sympathizes with the struggle of “the black man,” but made it very clear that he doesn’t accept such struggles as an excuse to tap out on life or to get out of your responsibilities.

“I understand why black men feel like we feel, but we can’t use it as no excuse. I ain’t down with no excuse man. I refuse to accept that as an excuse….At some point we have to quit complaining and take what we want…We don’t take what we want… I look at brothers saying “Man, I can’t pay this child support, she won’t even let me see my kid.” If someone took your car from you, you would chase them and fight them. If someone took your car, your golf clubs out your car,  you would find your golf clubs. There ain’t a woman that can keep me from my child. There is not a woman walking, even if I hate you, that can keep me from my child…”

SOMETIMES YOUR DOWN FALL IS YOUR SAVING GRACE

Don’t allow what you struggle with mentally, physically or emotionally take over your life in a negative way. Sinbad reveals how growing up, he suffered from ADHD, and exactly how this affected his upbringing.

Instead of his parents sedating him with prescription drugs, they decided to empower him to be the best at whatever he set his mind to, no matter what stood in his way.

“Wasn’t no medication for ADHD when I was coming up, it was called “you gon’ play sports and you gon’ be in the band and you ton’ stay in school, but you don’t come here till you tired. You don’t walk in this house until you done doing whatever it is you got to be doing.”

As an adult, Sinbad adopted the same attitude as his parents and insists that his disability was the driving force behind his success. Persistence beats resistance, so keep doing what you’re passionate about, no matter if it makes sense to the next person or not.

Sinbad stressed to never “deny your crazy!” At first thought, it sounded like just another joke, but when you wrap your mind the concept, there’s loads of truth in such a statement.

RESPECT THE PATH SET BEFORE YOU

Martin Luther King, Jr., Rosa Parks, Malcolm X and President Barack Obama went through great measures to ensure positive change, by creating opportunities for African Americans, and all nationalities, to breed success.  However, more and more it seems that these monumental historical advances are being forgotten.

“As an entertainer, I look at people who couldn’t go through the front door. I’m looking at Cab Calloway, Dizzy Gillespie, people I wanted to be, and how they could read music and write music, when we weren’t supposed to be able to read, wasn’t supposed to be allowed to read. And then as soon as we’re allowed, we don’t want to go to school. 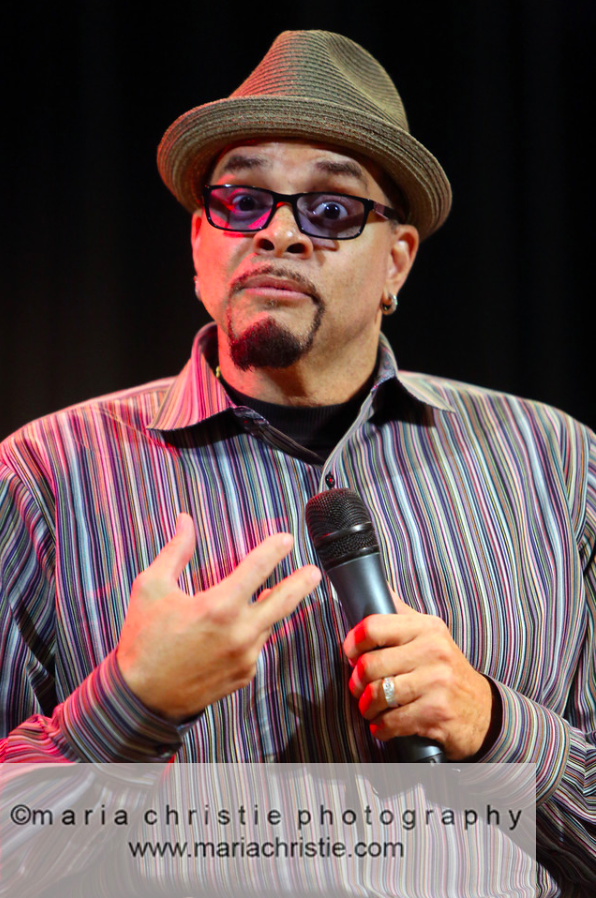 We fought, we got beat…we still sitting in the back of the bus now. We got beat and now where’s the first place we go? We go right to the back…we go straight to the back [of the bus]. I know kings like this, “Y’all want to stay in the back, we could of just…Y’all got folks getting beat down, y’all like the back?”

Get to know and understand the stock that came before you. It’s because of them that we have some of the civil liberties that most take advantage of today. We have to do better!

STEVE HARVEY’S BOOK “THINK LIKE A MAN” ISN’T THE END ALL, BE ALL IN RELATIONSHPS

Sinbad challenged the crowd, in a group exercise, to dissect the advice given in Steve Harvey’s best selling book “Think Like a Man, Act Like a Woman”. With every piece of commentary offered from the crowd in support of said book, Sinbad had a full proof answer as to why the advice given should be negated at all costs.

The exercise had the crowd crying with laughter. Sinbad debunked the 90 day rule, gave a few “realistic” dating tips and reminded the audience that women aren’t the only one’s that need to put more value in themselves, as Harvey’s book suggests, the same goes for men too. One would be remiss to think that women should be the only gender to hold themselves to a higher standard.

YOUR FAITH HAS TO GO B-I-G!

Sinbad’s featured advice on faith was a reminder to meeting goers that in order to do the impossible, you’ve got to do the invisible.  It was no secret that Sinbad is a God fearing individual, cautioning the crowd to remember “…sometimes you miss your blessing trying to do your own thing.”

YOUR JOB IS TO BE A SARCASTIC PARENT

Now, we live in a world that our forefathers wouldn’t be able to recognize, especially when it comes to child rearing. Our youth are walking around getting away with just about anything, with zero accountability. Something that generations before us, wouldn’t have ever dreamed of. Sinbad offered up some interesting, yet surprisingly valid parenting tips to the crowd.

“Your job is supposed to be a sarcastic parent! You know you’re doing your job as a mother when your kids think you’re crazy. When your kids tell their friends you crazy, you’ve done your job,” yells Sinbad.

As shocking as it sounds, Sinbad speaks candidly of a healthy fear children should have of their parents and for discipline in itself. One must remember, the discipline that a child receives from his parents is of no comparison of the discipline a person will receive on the outside world. No comparison at all.

We’d like to thank Sinbad for sharing his wisdom and humor with Sacramento and Indivizible members!

If you were in attendance, please be sure to head on over to Maria Christie’s Photography to find and purchase your photo’s!

Any thoughts on Sinbad’s colorful views on life?