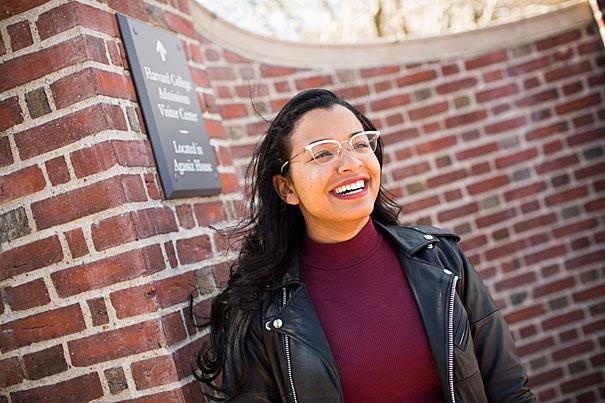 This is one in a series of profiles showcasing some of Harvard’s stellar graduates.

When Dominique Donette tells you that she was born in a prison, she’s not speaking metaphorically. Donette’s mother gave birth to her in a federal penitentiary while serving time for a nonviolent offense. “My mom was a sex worker; my dad was a pimp,” Donette said in an interview. Growing up, she attended more than two dozen schools as she moved around California’s Bay Area and beyond, living alternately with her parents, foster parents, and relatives.

Now, Donette is about to graduate from Harvard with a master’s degree in education policy and management. But she’s not pushing a “bootstrap” message, she cautioned. “I don’t want to tell that lie to people. … ‘I made it, you can too.’ So many people are working so, so, so hard who will never have the opportunities I had.”

One of those opportunities, in the midst of her chaotic upbringing, was a six-month stint in Hawaii, attending a well-funded private school. “Because of my parents’ lifestyle, there were some moments of privilege,” Donette said. “But then at another time, I went to the lowest-performing school in Sacramento.” She also attended Sacramento High, where she recalls there weren’t enough books to go around, and as many as 50 students crammed into a classroom. Yet Sac High also had a strong performing arts program that attracted some top students from around the city.

Witnessing those contrasts gave Donette an acute awareness of the vast inequities in education, and it helped fuel her journey to the Harvard Graduate School of Education (HGSE).

From a young age, Donette threw herself into two pursuits that helped her cope with a troubled home life: studying and volunteering. “I was very active in the church and my community,” she said. “The church is where I started understanding how community organizing works.” She earned a Gates Millennium Scholarship to enroll at the University of California, Berkeley, where she double-majored in dance and American studies.

The weather determined the course of her next volunteering focus.

“[Hurricane] Katrina happened the day before I started undergrad,” Donette said. “So I spent every spring break and summer throughout undergrad organizing, involved in different change-making campaigns in the Gulf South.”

Her other watershed college experience was a study abroad semester in Ghana. Of Persian and African-American descent, Donette said that “I had this strong black identity and I thought I had returned ‘home,’ and [Ghanaians] were like, ‘No, you haven’t,’ ” she recalled with a laugh. “Eventually, I realized the power structures there were so different. The people in power are all black; people in ads and TV are all black; the police are all black. Something happens when you see visions of yourself in these positions.”

Indeed, Donette literally saw visions of herself on local TV, after she did some video work as a dancer and choreographer for a Ghanaian pop singer. That came about when California’s budget crisis prevented her scholarship check from arriving on time, and she suddenly needed a source of income.

Dancing was a more fun way to pay the bills than Donette’s usual jobs, bartending and housecleaning. Although the Gates scholarship took care of her college expenses, Donette had to take out loans for an unrelated reason: to help with her mother’s legal fees. She even started a small cleaning business while in college.

After graduation, Donette moved to New Orleans to work for the nonprofit Kids Rethink New Orleans Schools. The organization was formed to involve the city’s children and teenagers in the discussions and planning of school reform, an initiative that was in danger of being driven by well-meaning adults arriving from elsewhere. “We trained young people with the skills to be the leaders,” Donette said. “Even though I was an outsider also, I think I understood the importance of having local people at the forefront of the decision-making.”

Following that and a brief period teaching English in Turkey, Donette tried her hand at politics, working for the campaign, ultimately unsuccessful, to elect Harvard alumnus Marshall Tuck, M.B.A. ’00, the superintendent of public instruction in California. “That was probably the most pivotal moment in my professional career,” Donette said. “It showed me a lot of my weaknesses. … It also helped me understand state politics, and how state and federal government policies affect local education. [I realized] I needed a better framework for policy.” And that drove her to apply to HGSE.

At Harvard, Donette has gotten the policy framework she sought. “I have so many personal experiences and anecdotes, but having an actual text to refer to, or actual data or research or law or statute — that’s what I came here for.” Even a nitty-gritty course such as “Introduction to Education Finance and Budgeting,” which “made me miserable,” she said with a laugh, “was great information for me. I need to know how to read a report and talk about money.”

The past year has brought Donette some wholly unexpected adventures, such as when a conversation on a rafting trip in Vermont led, later, to a much longer trip — to Senegal, to meet with that country’s minister of education.

“It’s been a transformative experience, but not in the way I thought it’d be, and that’s OK,” said Donette.

What she’s picked up most of all at Harvard is a new boldness and way of thinking that she hopes will help her in a career tackling inequities in education, in whatever form that career will take.

In Donette’s metaphor, “There’s this building, and there’s a floor with a feast behind a closed door, and someone has the key.” “And often folks from high-poverty areas or historically disenfranchised, marginalized communities, black and brown, we often don’t know where the building is, what floor the feast is on, or, if we find the floor, we don’t have a key to the door and don’t know who to ask for it.

“Being at Harvard has pushed me to think more like the people who know how to navigate the system,” she explained. “Like if I got to the building, I’d say, ‘Oh the building’s closed.’ But I’ve met Harvard colleagues who are like, ‘Nope, there’s food in this building. I’m getting the key, I’m enjoying that feast.’ So I’ve had to learn to think more like that. To not take no for an answer, for myself or my community, and to learn from the people who’ve felt empowered or confident in their lives.”

That said, Donette remains committed to partnering respectfully with the disenfranchised, not imposing solutions on them. As she put it, “I will continue to treat people as experts in their own lives. … Recognizing where I came from, who my ancestors are, the sacrifices that have been made for me, by my grandmother, all the families I stayed with, my parents, even though they weren’t able to parent, the people who stepped in when they couldn’t, all my siblings, my community, I really believe I’ve been afforded this incredible opportunity, so the greatest gift I can give back is to use my skills to push for access for them.”