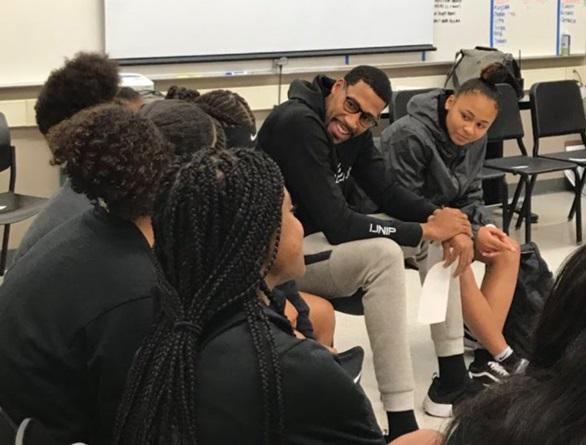 It is common for professional athletes and local teams to support the communities in which they live and play. Sac High and St. HOPE have certainly received generous support from local teams such as the Kings and FC Republic, and from players like DeMarcus Cousins. These relationships have produced plenty of photo ops and check presentations, not to mention incredibly exciting opportunities for St. HOPE students.  This has been no more evident by the recent addition of Garrett Temple to the Kings roster.  Like Mr. Cousins before him, Mr. Temple desires to show support for the community, but in a different way.

For the 2017-18 season Mr. Temple adopted Sac High, but not for the school’s athletics. Instead, the Kings shooting guard and NBA veteran, profiled here by the Sac Bee, wanted to create an opportunity to build a community at Sac High, known as #GTDragons on Twitter, focused on advocacy and activism. Late March will mark Temple’s seventh visit to Sac High with an off campus trip planned for students later in the month, which follows a Friday viewing party for Black Panther at the newly opened DOCO Cinema.

Through those visits students have had the opportunity to hold discussions on a range of topics extending far beyond the world of sports. Currently, students are working with Mr. Temple and other members of the Kings staff to determine the issue most important to them so they can partner with the Sac High administration to see the school improve in the selected area. Potential areas of focus have ranged from race in the current political climate, to guns in schools, and to Sac High specific issues like the dress code, teacher retention and the curriculum the school selects.

While the NBA season will end in the spring, it is the goal of Sac High and Mr. Temple that the partnership extends as students continue to find their voice and work collectively to see through the change they feel is necessary in their school and community.

In addition to supporting students, Temple also works to expose younger members of the Kings roster to his work as a way to ensure the number of athletes and people of influence who look to support social causes continues to grow. The first event of the partnership included rookies Harry Giles and Frank Mason, as well as plenty of members of the Kings front office team.

Ultimately, the Sac High students involved are benefiting from their partnership with Garrett as is obvious by the response he now receives upon arrival on campus, where he has become a familiar face. However, long term success will only be attained if more students at Sac High and across the city have the chance to benefit from opportunities like this and continue to advocate for themselves and their community.