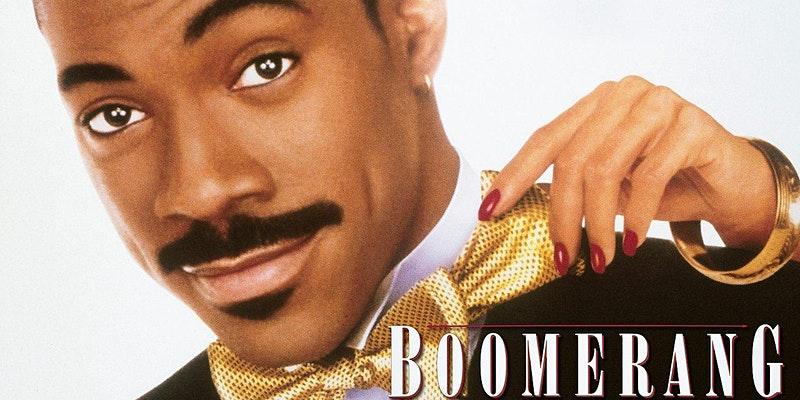 Come to Esther’s Park and watch Boomerang with us!

Come watch Boomerang with us on Thursday, October 15th. Bring your blankets, chairs, and friends. We will provide the food, drinks and snacks for purchase!

Boomerang is a 1992 American romantic comedy film directed by Reginald Hudlin. The film stars Eddie Murphy as Marcus Graham, a hotshot advertising executive who also happens to be an insatiable womanizer and male chauvinist. When he meets his new boss, Jacqueline Broyer (Robin Givens), Marcus discovers that she is essentially a female version of himself, and realizes he is receiving the same treatment that he delivers to others. The film also features Halle Berry, David Alan Grier, Martin Lawrence, Grace Jones, and Chris Rock.

Murphy assisted in developing the story with writers Barry W. Blaustein and David Sheffield, having worked with the writing duo since his days on Saturday Night Live. Murphy hired Hudlin to direct Boomerang, following the latter’s success with his debut film House Party (1990). Hudlin and the writers aimed to create a romantic comedy that differed strongly from Murphy’s previous comic efforts. Filming took place mainly in New York City, while other scenes were filmed in Washington, D.C

The film was released in the United States on July 1, 1992 and was the 18th highest-grossing film in North America that year. Boomerang earned over $131 million worldwide during its theatrical run. The film garnered nominations at the BMI Film & TV Awards and the MTV Movie Awards, while its soundtrack became a top-selling album. Entertainment Weekly called it an underrated classic and one of the best Eddie Murphy movies of the 1990s. A 2019 television series based on the film, also called Boomerang, premiered on February 12, 2019 on BET.