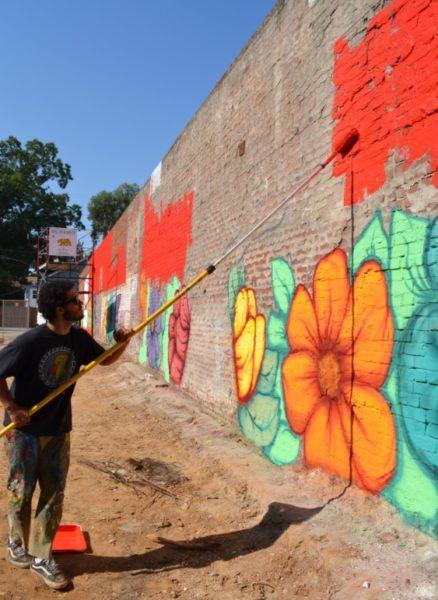 Aizik “Aik” Brown proudly describes himself as an Artist and Educator committed to improving the lives of those around him, particularly in Oak Park. Over the past two weeks, Valley Vision has been fortunate enough to have Aizik paint a stunning mural on the outside wall of our new office building as part of Sacramento’s Wide Open Walls mural festival, in partnership with St. HOPE.

As a product of nearby Sacramento Charter High School and Student Life Coordinator for College Track, his commitment to the Oak Park neighborhood is deeply rooted and unwavering. He was one of 33 artists selected to participate in this year’s Wide Open Walls mural festival, which each year connects artists with empty wall space around Sacramento. The piece celebrates his Mexican American and Black heritage, and juxtaposes the skulls and art associated with Dia de los Muertos (Day of the Dead) with bright colors and intricate designs to bring the mural to life. He explains the bright colors throughout the mural as reflecting the happiness and pride that he feels while in the neighborhood.

When asked how it felt to have his work featured so publicly in Oak Park, Aizik was initially at a loss for words, before sharing that he’s simultaneously proud and overwhelmed. Reflecting on the effort and countless hours spent fine tuning his craft, he declared, “It’s crazy to think this actually happened.” When people walked by his mural or snapped photos during its development, he was eager to strike up conversations and engage with community members. The importance of human interaction and connection was a point that he emphasized throughout our conversation, at one point saying, “I want to be approached by people. I want them to say hello if they see me. I want them to tell me what they think of my art. Human connection and interaction is key.”

Regarding Wide Open Walls, Aizik says it’s a great platform to celebrate the talented visual artists that Sacramento has always had. He looks forward to seeing how the annual mural festival develops over the years, and hopes it maintains the local feel while also remaining dedicated to its slogan: “Art for All”. He hopes that the festival continues to place art in all of Sacramento’s neighborhoods while inviting more artists of color to participate as artists.

Engaging communities and incorporating arts is how he plans to grow as an artist and as a person who thrives off human interaction. Aizik invites everyone to visit his website: aikbrown.com – and keep up with him on Instagram @AikBrown and Twitter @AikBrownX.

Valley Vision invites you to check out Aizik’s mural at our upcoming Open House on Thursday September 13th! We are excited to be partnering with Unseen Heroes during GATHER: Oak Park to welcome you to our new space. RSVP now!