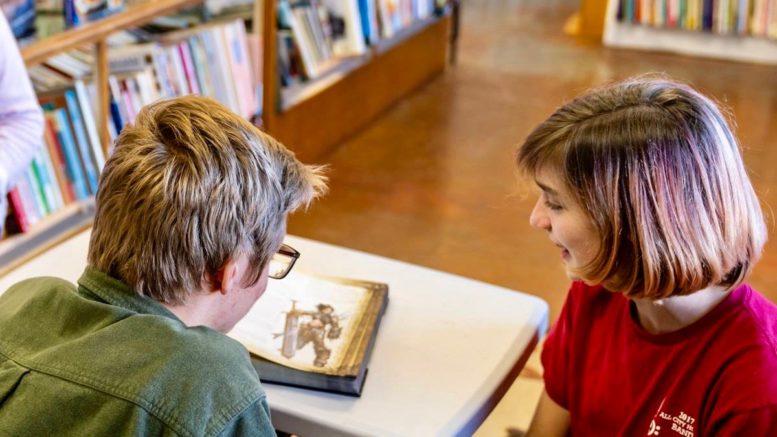 Young people get into their book groove at Crawford’s Books in Sacramento.

From Davis to El Dorado Hills, the struggle to protect local book culture from a black swan event was waged by workers and customers alike

For those needing comfort and stimulation in dark times, independent bookstores were the most essential businesses to be deemed “non-essential” by the State last year, though Sacramento-area readers never bought that logic, many determined to support their favorite intersections of learning, imagination and community any way that they could.

The collective resolve paid off. All of the region’s indie book hubs – at least for the moment – are still standing. With Saturday marking national Independent Bookstore Day, seven of those businesses are holding a joint passport event to re-connect with customers and show their appreciation for the loyalty that allowed them to survive.

A Victor Hugo quote on the wall in Crawford’s Books in Sacramento took on deeper meaning last year.

When California Gov. Gavin Newsom decided in March of 2020 to enact some of the strictest lockdown measures in the nation, many small business owners realized they were in for tough times. Just how tough was a question that was only answered over a rocky period of 14 months marked by changing trendlines, expanding health goals and a fraught political climate that was constantly shifting. In September, Yelp.com released a report that estimated, according to its own data, that 60% of business closures across the nation due to the lockdowns were permanent. At that mid-point in the COVID crisis, the figure represented nearly 100,000 small businesses.

Local Independent bookstore owners had to wonder if they’d join that growing causality list. And some of them, like Sue and Greg Richards, only had a couple of years of experience under their belts before facing the cloud. The Richards own Crawford’s Books in the Sacramento neighborhood of Hollywood Park. The store was founded in 1983 by Jim and Joyce Crawford. Over time, Sue became one of its diehard customers. She and Richard got the chance to buy the shop in 2018.

Sue kept what she cherished about Crawford’s while bringing a timely update to its marketing strategy and social media presence. She also poured her own personality into the shelves.

“I tripled the size of the kids’ section, because that’s my passion,” Sue noted.

Then COVID-19 hit. Between March and May of last year, independent bookstores could only process online orders or offer curbside pickup. This could have been a financial disaster for modest operators like the Richards; but it turned out that most stores situated around Sacramento, including Crawford’s Books, saw nearby neighborhoods rallying to their cause.

“In the first two years, I made a lot of connections with customers, and by January of 2020 I’d really started to build some momentum,” Sue recalled. “And that momentum with the community is what carried us through.”

The golden retriever Ruby, namesake of Ruby’s Books in Folsom, walks around the store greeting people.

On Saturday, April 24 – Independent Bookstore Day – Crawford’s and six other outfits will jointly host the Gold Country Book Tour 2021. The event encourages people to visit participating bookstores to browse, buy books and check out exclusive merchandise, all while collecting prizes. Book-lovers can pick up a passport at any of the seven stores, getting it stamped by each additional store that is visited. Checking out one bookstore earns a free button. Visiting two gets a free vinyl sticker. Arriving at three lands a free enamel pin.

Book fans who visit four or more stores with a passport are eligible to be entered in the grand prize drawing – a bag of books, each carefully chosen by bookstore staff, along with special swag that includes commemorative bookmarks, t-shirts, and mugs.

Folsom’s Ruby’s Books, which signed its lease the same month the pandemic started, will ring in Independent Bookstore Day as live music and a large farmers’ market happens near its door in the historic quarter. Starting Wednesday, Ruby’s will also begin previewing the big occasion swag it’s offering for the passport event. Owner Stacy Gould said that the Gold Country Book Tour is an exciting way for her store to coordinate and cooperate with the other indie book hubs.

“For me, a big part of starting Ruby’s was about forming new community connections, so this is a good chance to do something with other stores that are helping preserve this book culture we all love,” she explained. “In terms of the continued customer support, I keep being amazed at how receptive people have been to what we’re doing.”

Gould is also looking forward to Saturday because it’s a chance to discuss new books with the public. Lately, her favorite title to recommend is “The Bad Muslim Discount,” by Sacramento author Syed M Masood, whose story of an immigrant family re-starting their lives in the Bay Area has drawn rave reviews.

“It’s been a fabulous book to read,” said Gould, who actually learned about Masood’s effort from a customer. “It’s a very funny story, to the point of having me laugh out loud through the whole thing. It’s humorous even while talking about very heavy topics. In that sense, the story’s done incredibly well.”

Sophie, an employee at Face in a Book in El Dorado Hills, has been known to play her violin for customers.

The team at Face in a Book in El Dorado Hills will use Saturday to remind customers – and themselves – about how exciting it is to imagine returning to live events. Prior to the pandemic, Face in a Book had made a name for itself by hosting the largest author appearances in the region. Though that’s still not recommended at the moment, the store will salute Independent Bookstore Day by hosting a hybrid outdoor event that mirrors the ones customers once flocked to. That includes its popular Read for Dogs event, in which children can show-up and read books aloud to trained therapy canines. On Saturday, between 11 a.m. and noon, kids can interact with a Corgi and Golden Doodle who love young faces.

“It’s really good for children, especially kids who are reluctant readers,” said manager Janis Herbert. “We’ve been doing Read for Dogs for about four years, and we’re so looking forward to starting it again on a regular basis, once we’re able to.”

Face in a Book will also host acoustic guitarist Pete Schroeder from noon to 2 p.m.; Sacramento crime novelists Claire Booth and James L’Etoile from 2 to 3 p.m.; and then end the day with a presentation on redecorating bookshelves between 3 and 4 p.m.

Other stores participating in the Gold Country Book Tour with their own special events are Beers Books in Sacramento’s Southside Park, Capital Books in Downtown, Underground Books in Oak Park and the Avid Reader in Davis.  All have seen groundswells of support throughout the pandemic.

“At first it was scary, but once we were able to do curbside service, I was constantly amazed and eternally grateful for my community, because they reached out En masse,” Sue Richards said, looking back. “To me, I saw the very best in people.”