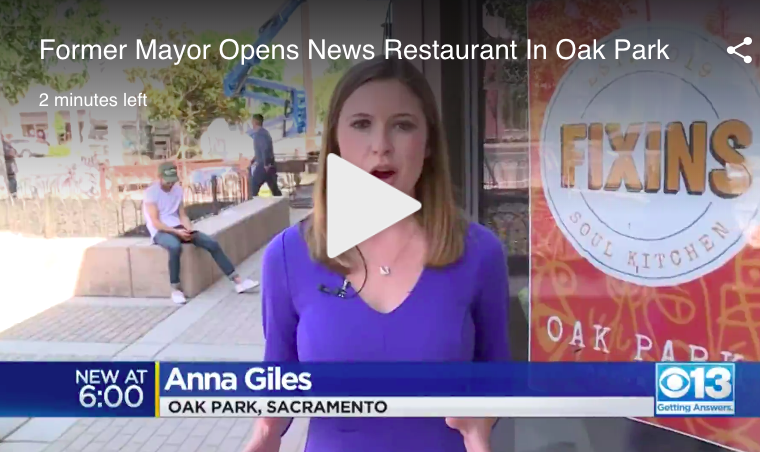 Former Sacramento Mayor Kevin Johnson has plans to open up a new soul food restaurant off of Broadway.

The new restaurant, called Fixins, is still a work in progress. Many would say that about the Oak Park neighborhood in general, but also that the area has come a long way in a short amount of time.

“Everyone’s growing with him and around him,” said Robert Robinson, who’s worked at the same barbershop for 11 years. It was recently re-named Protege.

READ ALSO: 101.9 The Wolf Flips From Country To Mexican Format; Change Also In Store For Hot 103.5

“There’s no doubt each business enhances the other and we just kind of work like a community and a family,” Robinson said.

Senegal remembered a time when he’d visit Oak Park for a haircut and worry about it. Violence, unemployment and deterioration were all a problem.

But people Oak Park were set on revival.

“It didn’t take long, I would say within three or four years the change was complete,” Senegal said.

By change, he meant more businesses, more development, more thriving. Former mayor Kevin Johnson had a lot to do with that. Some consider his new restaurant symbolic.

‘You can look at a number of other projects he’s done, he cares deeply about Oak Park, there’s no doubt about. I’ve always said it was my district but his neighborhood – where he grew up,” said Jay Schenirer, who represents Oak Park in the Sacramento City Council.

Robinson said Oak Park is like an ecosystem. People at the restaurants come to his barbershop and he returns the favor.

“But it’s up and moving you can see it every day. At least I can and everybody else that works in this area,” Robinson said.

“Mayor Johnson is thrilled to be bringing Fixins Soul Kitchen to Oak Park. When St HOPE first opened the 40 Acres complex, the original vision was to have a Soul food restaurant in that space. It’s amazing that on St HOPE’s 30th anniversary we can bring that dream to fruition. The Mayor has brought together a talented team to run the day to day operations of the restaurant but this effort has been a labor of love by the entire Johnson family and friends network. We’ve brought together recipes and favorites from lots of them (including Grandma Johnson!) and want to make them proud. We look forward to serving the Oak Park community and setting the standard for the American Soul Food experience by bringing together authentic, delicious food and impeccable service in a hip, energetic atmosphere. Fixins is confident that this establishment will bring the community together in a unique way. “

Managers at Fixins said the restaurant is expected to open by the end of the month. They said there will be a main dining area, a bar and a patio. They are hiring and have dozens of positions open.