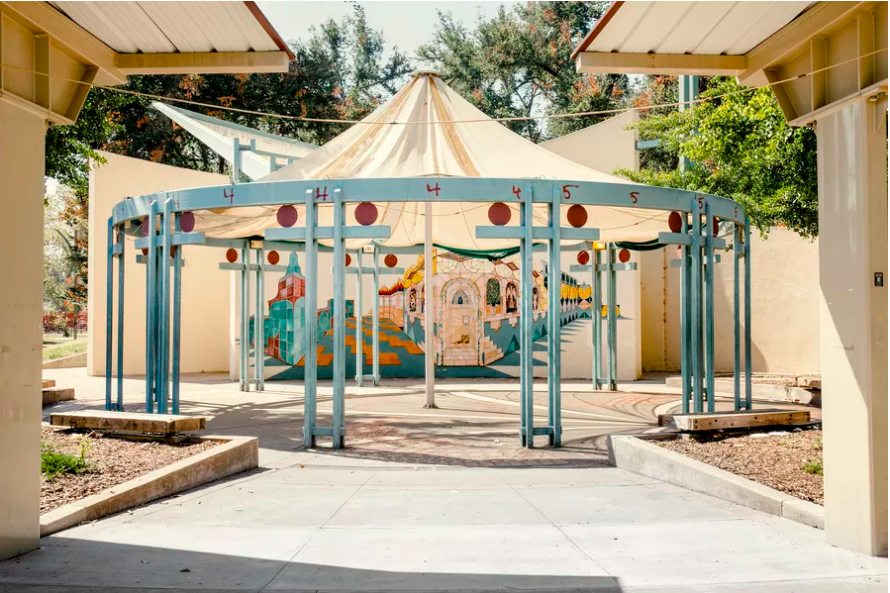 In the parking lot of a gas station on 24th and Broadway, a few blocks west of the 99, there’s a mural of an Indigenous man named Ishi. Shown holding two golden nuggets, presenting to the world the riches this land once yielded, Ishi was the last member of the Yahi people, one of the first groups to call Northern California home. Ishi, who died in 1916, has a story that symbolizes some of the earliest changes in the Sacramento Valley and the history of the West End, then the most racially diverse part of Sacramento.

“That was where immigrants landed,” says Robin Datel, a Sacramento State geography professor, describing the land around western Broadway, between the Capitol building and the Sacramento River. “That’s where Japantown and Chinatown was, [and] the largest African-American community; lots of Latinos, and Eastern Europeans and Southern Europeans. It was an amazing melting pot kind of place.”

But a trio of post-World War II federal acts—the Housing Acts of 1949 and 1954 coupled with the Highway Act of 1956—brought a combination of freeway construction and redevelopment, and laid the groundwork for an urban makeover. City officials deemed 60 blocks of land blighted, and the diverse West End neighborhood was wiped off the map and its residents were displaced.

Homes and storefronts were demolished—even the former California Governor Goodwin Knight got in on the destruction, manning a crane to destroy a West End building in 1957—and by the end of 1965, the Capitol Mall Development project had brought about pristine tree-lined walkways, new housing options, and more towering office buildings than ever before.

That was coupled with the development of a highway interchange between I-80 (Business Loop 80) and I-5 (the West Side Freeway), which would eventually run directly through the old West End neighborhood.

Some of the historic buildings in the neighborhood—railroad-related relics—were preserved and turned into tourist attractions, but the residents were pushed out. Datel says those people could only move to certain neighborhoods, citing anti-Black covenants, anti-Japanese laws, and other forms of discrimination.

One exception was the east-side neighborhood of Oak Park. “It was built before racial covenants came into play,” says Datel, who is also the author of the Oak Park walking tour guide. “Oak Park was available to people of color, as was Del Paso Heights (on the north side of town). And those became the major African-American spaces, even to this day.”

One day in August, I met a handful of longtime Oak Park residents: Robin Ware, an African-American community activist and former president of the Sacramento chapter of the NAACP; Joy J. Gee, a Chinese artist and educator; and Masako Yniguez, a Japanese artist, historian, and part owner of the neighborhood’s Belmonte Gallery. William Burg, a white guy who works as a Sacramento historian, organized the meeting.

He notes that from the Gold Rush until about 1880, Sacramento was the second biggest city on the West Coast. And now with a population of just under 500,000, it’s the sixth-largest city in California, behind Fresno.

Burg jokingly recaps the city’s history: “A white guy built a fort, and this other white guy discovered gold, and then these four white guys built a railroad.” The historian challenges the perception of Sacramento as a “farm town.” “It was an industrial city from day one. It was a diverse city from day one.”

In fact, Sacramento is one of the most diverse cities in the country. Compare the ethnic makeup of Sacramento (95817) to your city, 95816.

In 1891 a streetcar line was created to take people from the jobs in downtown and railroad yard near the West End, to the far-eastern neighborhood of Oak Park. Just before the start of World War II, Broadway, originally called Y Street, had developed into a booming community.

Local merchants successfully pushed to rename the street in 1938, in effort to give it the appeal of New York’s theater district. Venues like the Alhambra Theatre, Guild Theatre, and Tower Theatre were surrounded by a variety of restaurants and thriving neighborhoods.

Sacramento Electric, Gas & Railway Company (which later became the Pacific Gas & Electric company) owned the streetcar system. At the end of the line, they constructed Joyland, an electric theme park, which eventually burned down, twice. In 1927 Valentine McClatchy purchased the park and dedicated it to James McClatchy, The Sacramento Bee newspaper publisher, renaming the park in his honor when it became possession of the city.

On top of the business and community developments in the mid-20th century, Broadway had turned into a strip for used car lots and auto mechanic shops, as well as a place for people to show off their low riders and hot rods—there are still anti-cruising signs on the street to this day. The culture in and around the corridor was starting to thrive. Then the freeways closed in.

“Before the WX freeway was built here, Broadway was a main drag,” says Council Member Steve Hansen, who represents Sacramento’s District 4. Hansen’s jurisdiction includes the far western end of Broadway, but he purchased his first home in Oak Park, so he’s familiar with the eastern side of the corridor as well.

Hansen also believes, like Datel, that the use of freeways to “redevelop” communities around the nation really ended up displacing and destroying them. “We designed these big roads with the thought that everything else was second,” says Hansen. “And now we’re trying to repair and resurrect communities that suffered because of that thinking.”

Hansen is behind the effort to once again make Broadway a place people want to hang out by pushing the Complete Streets effort, a plan to make the western side of Broadway more accessible and inviting to pedestrians.

The plan covers the Marina, Tower, and Upper districts of Broadway, but stops where Route 99 separates those areas from Oak Park. Although there are a number of Asian-owned stores and a nice-sized Hispanic population in the area, it is the mostly white neighborhoods of Curtis Park and Land Park that will be the immediate beneficiaries of a more walkable corridor.

“Broadway itself hasn’t flourished the way it can because of this mentality around it being a place to pass through, not a place to be,” says Hansen. “And when you don’t create a good urban context, a good urban design, people just don’t want to be there.”

Hansen has no qualms about advocating for the potential of Broadway. The street is a restaurant haven, and to this day, there is economic and cultural diversity along the thoroughfare. “It’s a fascinating cross-section of Sacramento, it’s the epitome of who we are.”

That cross-section is well illustrated by the great denominator: real estate prices. According to Zillow, the median home price on the west side, around Land Park, is $570,900. On the east side, around Oak Park, the median lives somewhere around $218,000.

Dave Gull, owner of the east-side New Helvetia Brewing Co. and board member of the Greater Broadway Partnership, has straddled both sides of the 99. Gull says that as a teenager in the 1980s, he’d leave his home in Oak Park and get his music fix by listening to tunes at the free headphone stations inside of the nation’s first Tower Records.

And over the decades he’s spent on Broadway, Gull has grown to know a little bit of everyone. “It’s Sesame Street. The neighbors know each other! I know every business owner within earshot of my building.”

Gull agrees with Steve Hansen’s view that Broadway is a microcosm of Sacramento—but says it needs more institutional investment. In reference to a 10-year plan to build a bridge connecting the western portion of Broadway to the city of West Sacramento across the river, Gull doesn’t seem to be waiting for the results: He likes Broadway as it is. “It’s a bit funky, with an international flare, and working-class feel,” he says. “There aren’t a lot of Bentleys or Teslas flowing through here.”

Broadway’s heartbeat is most evident in the people who inhabit it. The ever-busy Mother Rose owns Underground Books in Oak Park, not too far from where she raised her son, Sacramento Mayor Kevin Johnson. (The polarizing Mayor Johnson has seen a mixed bag of media coverage: sexual abuse accusations and legal proceedings related to withholding emails considered public records; as well as stories about his efforts to bring affordable housing, federal education initiatives, and tech startups to the community.)

Mother Rose believes Broadway, and her Oak Park community, is on the incline, noting that across the street from her store, a stagnant auto business has been replaced by a flourishing plant nursery.

The heartbeat is shown through the people flowing in and out of Joe Marty’s sports bar, the people shaking hands outside of the convenient store on Martin Luther King Jr. Boulevard, and the people eating at the Wingstop on the edge of sleepy Tahoe Park on the eastern end.

The pulse flows through the students riding the 51 bus line and the dedicated members of the Women’s Civic Improvement Club—an organization that has been around for 80 years, originally created as a safe housing option for women of color.

There are “Triangle District” signs on the light poles of Oak Park, evidence of the remarketing of the neighborhood—gentrification as some would call it. Black Lives Matter signs sit in the windows of African-American and Hispanic-owned businesses, not too far from where the local chapter of the Black Panther Party headquarters was once located.

“The way the West End looked 100 years ago is more like the way Sacramento looks as a city now,” says William Burg. “At the time, minorities were hidden away, a source of shame and embarrassment for the powers that be,” says Burg. “[The thinking] was: We’re just going to destroy this, and hope that they vanish. Instead of vanishing, they flourished.”