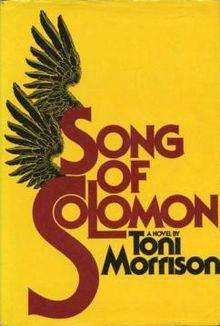 Song of Solomon is a 1977 novel by American author Toni Morrison. It follows the life of Macon “Milkman” Dead III, an African-American man living in Michigan, from birth to adulthood.

This book won the National Books Critics Award, was chosen for Oprah Winfrey’s popular book club, and was cited by the Swedish Academy in awarding Morrison the 1993 Nobel Prize in literature.[1] In 1998, the Radcliffe Publishing Course named it the 25th best English-language novel of the 20th century.