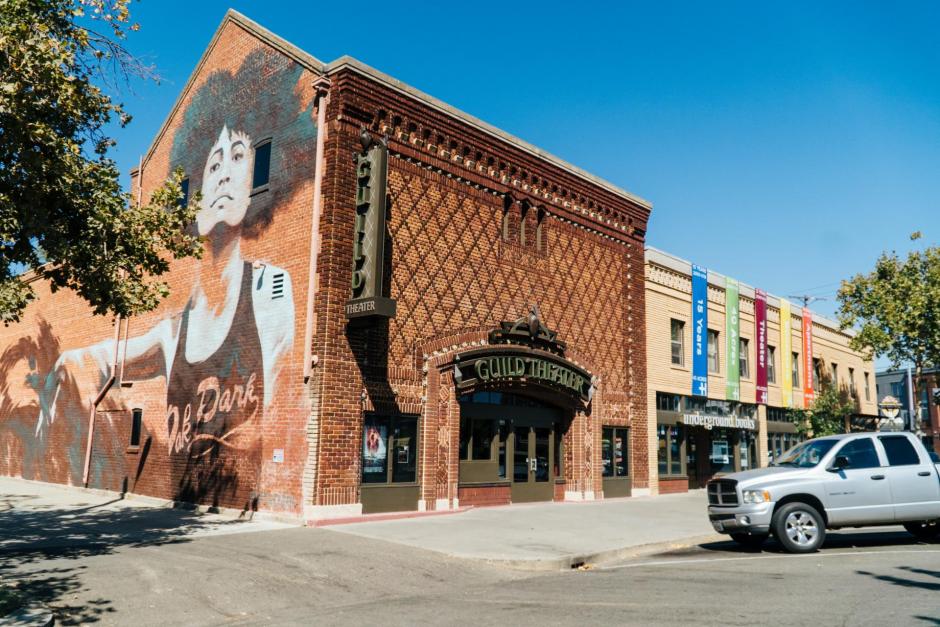 Long-time Oak Park resident and activist Robbin Ware remembers that when he moved to the neighborhood, “there wasn’t a damn thing.”

“There wasn’t nothing here but gangs, drugs, drugs being sold,” said Ware, 82.

Nearly 20 years later, Oak Park has become a hotbed of investment and development. One organization in particular has been busy — St. Hope.

Established in 1989, St. Hope began as an after-school program at Sacramento High School called the St. Hope Academy. It was founded by former Mayor Kevin Johnson, who grew up in Oak Park and returned to his native Sacramento after retiring from the NBA.

The nonprofit has since expanded to a system of charter schools and a development company that focus on the revitalization of Oak Park. For St. Hope’s 30-year anniversary, the organization commissioned an economic impact report of its activities in the past three decades.

The verdict? Over $66.2 million in expenditures over 30 years has created an estimated economic impact of $89 million in Oak Park and more than $401.7 million in the greater Sacramento area, the report said.

And the neighborhood has no doubt changed.

“You feel safe walking your dog, going outside, doing community activities, going to the park,” said Dru Burks, 45, who works for St. Hope at the Guild Theater. “Before, it wasn’t like that.”

St. Hope Development’s first project in Oak Park was the 40 Acres Art and Cultural Center on Broadway, unveiled in 2003. The project involved refurbishing the old Guild Theater and Woodruff Hotel buildings at 35th Street and Broadway, a complex that had long been vacant. 40 Acres currently includes the Guild Theater, Underground Books, the Old Soul coffeehouse and Twelve Loft Apartments.

Out of the $4.4 million required for the project, the Sacramento Housing and Redevelopment Agency provided $2.5 million in loans and grants while St. Hope footed the rest of the bill.

At the time, the Woodruff Hotel was “ground-zero” for the drug and crime activity in the neighborhood, according to Jake Mossawir, CEO of St. Hope.

“When we opened up 40 Acres, people wouldn’t even come to this community,” said Georgia West, who runs Underground Books and is Johnson’s mother.

Fixins Soul Kitchen is slated to open at that same complex at the end of July. When it does, it will be the largest soul food restaurant in Sacramento and finally complete the original vision for 40 Acres: a theater, a bookstore, a coffee shop, a barber shop and a restaurant, Mossawir said.

A St. Hope-owned building at 2450 Alhambra Blvd. houses Teach for America and College Track. The long-vacant 14,400 square-foot building was purchased in January 2017 for $2.6 million and is only a few blocks away from Sacramento Charter High School, which is a part of the St. Hope Public Schools charter system.

That corner of Alhambra and Broadway has been many things over the years — an empty storefront, a gas station, a bank — but Mossawir said it was important to him to have “something special” there at the entry and exit point for Oak Park.

Other buildings on Alhambra and behind 40 Acres are occupied by organizations such as the Sacramento Asian-Pacific Chamber of Commerce, Greater Sacramento Urban League, City Year, Valley Vision and Unseen Heroes.

Joany Titherington, president of the Oak Park Neighborhood Association, said St. Hope was a “catalyst” of change in Oak Park and has contributed to its development while the “synergy of the community” moved things forward.

In cities across the nation, the issues of gentrification and lack of affordable housing have taken root, and Oak Park is no exception. Sacramento’s median rent rose faster than any other U.S. metrofrom 2017 to 2018 and was ranked the 28th most expensive in the U.S. in a recent study.

The increase in median household incomes pales in comparison.

“There has been a displacement of poor people in our community,” Titherington said, attributing the cause to the overall development in Oak Park and not one particular organization’s activities.

Titherington said there have been businesses — such as a men’s clothing store and a boutique — that have come and gone because they simply were not affordable. A pair of socks for her brother, she said, had cost $30.

“There wasn’t the income base to support that kind of shop,” she said.

Tanya Faison, the founder of Black Lives Matter Sacramento, led protests against the gentrification of Oak Park in 2016 as well as the Old Soul coffee shop in 2018. She believes many of the businesses and new housing that have entered the neighborhood are unaffordable for residents.

Oak Park is known as a historically black neighborhood, at one time even the home of the Sacramento branch of the Black Panther Party.

“It was kind of the Mecca for the African American community in Sacramento, but now it’s really dwindling and changing,” said Michael Blair, 50, of the South Oak Park Community Association.

In 2000, residents that identified as Black or African American made up 32 and 34 percent of the census tracts that encompass Oak Park. In 2017, it was 24 and 28 percent.

In South Oak Park where Blair lives, what he believes to be the first two white families on the block recently moved in. In the neighborhood association, he’s dealt with tensions between old and new residents of Oak Park as well.

“You have different cultures coming together but not understanding each others’ backgrounds,” he said. “It’s gonna take more understanding and communication to make it work from both sides.”

Mossawir said St. Hope strives to run businesses and recruit tenants that are accessible to the community and serve it in some way, especially the students.

“We want to continue improving the quality of life standards, but we don’t want to do it at the risk of displacing residents,” Mossawir said.

Since St. Hope does not focus on housing development, Mossawir’s priorities for addressing the issues in the neighborhood are to support the students in Oak Park through the charter schools, directly creating jobs and retention of culture through restaurants and retail developments geared toward residents.

The new Fixins Soul Kitchen will hire over 50 employees “on day one” and will eventually employ around 70, Mossawir said.

West, who runs Underground Books, believes that the organization has worked hard to preserve culture through the various activities and events hosted by the bookstore and the Guild Theater.

“Change is hard, I know there’s been a lot of changes, but as long as we can keep our own voice in this community,“ West said. “We’re a diverse community, and we want to keep it diverse.”

Sacramento High School was facing state intervention in 2003. Student performance scores were dropping year after year, and the prospects for the school were dismal.

Then, St. Hope proposed re-opening the school as a charter, competing against two other charter proposals. St. Hope’s proposal was a controversial one; teachers were angered that the plan did not guarantee their jobs or collective bargaining rights, and the California Teachers Association threatened to file a legal injunction if the school board approved the charter.

In March 2003, a divided school board voted to approve the St. Hope charter petition and award them use of the Sacramento High School campus. After a months-long legal battle, the new Sacramento Charter High School opened in September 2003.

Anaiyah Cabrellis, 18, just graduated from Sacramento Charter High School. She’s at the top of her graduating class and this fall will attend Howard University – a historically black university in Washington, D.C. – to study International Business.

Her family has been in the St. Hope Public Schools system for years — her older siblings attended Sacramento Charter High School, and she went to the PS7 elementary and middle schools before high school.

Sacramento Charter High School “really sets you up for college,” Cabrellis said. Cabrellis was accepted to all of the UC campuses, Spelman, Northwestern and NYU-Shanghai. She said she was wait-listed for Harvard, where her sister attended graduate school.

Not only was Cabrellis active in cheerleading and student government, she also worked at Underground Books at 40 Acres and attended college preparation classes at College Track, a St. Hope tenant.

St. Hope is “working to help a community that wouldn’t be helped otherwise,” Cabrellis said.

Moving further south from Broadway, Oak Park starts to look a little different. The houses are in need of a fresh coat of paint or two; some might need roof repair. It’s farther from the UC Davis Medical Center, farther from the commercial development along Broadway and farther from downtown Sacramento.

Starting next June, the entire school is getting a major face-lift.

St. Hope received $25 million in state grants and low-interest loans to rebuild the school to double its size and upgrade some existing facilities. Using the elementary school as the centerpiece, the organization also plans to utilize the large tracts of land it owns around the area.

Mossawir envisions a large mixed-use project akin to a smaller version of the Sacramento Railyards project that would include apartments, restaurants, a pediatrician, other retail entities and, perhaps most importantly, a grocery store in a neighborhood with few healthy food options.

“We wanna make sure it’s something the neighborhood can be proud of,” Mossawir said.

It would be St. Hope’s first major project in South Oak Park.

For Blair, the development is “way overdue” and “very well-needed.”

Blair has lived in Oak Park for 16 years and believes St. Hope’s business track record and years of community involvement puts it in a position to succeed with the project.

“I think they’re one of the organizations that could actually pull something off like that,” Blair said. “(The project) could really do a lot for that southwest corner that gets highly neglected over the years.”

Many of the students that attend PS7 Elementary have to walk past illegal dumping sites and old mattresses and furniture on their way to school, Blair said. The land nearby has been sitting empty for quite awhile, and he’s excited for young people to see development that shows people “actually care about this neighborhood.”

“We can have nice things there,” he said.