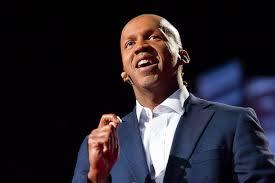 Bryan A. Stevenson is an American lawyer, social justice activist, founder and executive director of the Equal Justice Initiative, and a clinical professor at New York University School of Law. Based in Montgomery, Alabama, Stevenson has challenged bias against the poor and minorities, especially children, in the criminal justice system. Stevenson has assisted in saving dozens of prisoners from the death penalty, advocated for poor people, and developed community-based reform litigation aimed at improving the administration of criminal justice.

He is working to establish The Memorial to Peace and Justice in Montgomery, which will document each of the nearly 4,000 lynchings that took place in twelve states of the South from 1877 to 1950. He believes that the history of lynchings influences the subsequent extensive use of death sentences in the South. The related museum,From Enslavement to Mass Incarceration, will offer interpretations to show the connection between the post-Civil War period of lynchings to the high rate of executions and incarceration of people of color in the nation