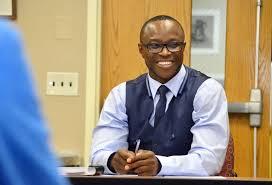 Surviving a Civil War
The prayers of a desperate woman inspired Quanuquanei A. Karmue (“Q”) to pursue his life’s work empowering young minds in war-torn Liberia. Only a decade ago, Liberia, on the western coast of Africa, was embroiled in a civil war that ravaged the country and claimed 250,000 lives. Q. Karmue, was a young boy when he attempted to flee the devastation with his mother, Neyor and four siblings. The family, however, encountered a group of rebel soldiers who intended to add his mother to the mounting death toll and take Q and his siblings as children soldiers.  The soldiers, mere children themselves, forced Q’s mom to choose between her life and the lives of her young children.  Unwilling to watch her children die, Neyor left them behind and marched at gunpoint into a field to be executed.