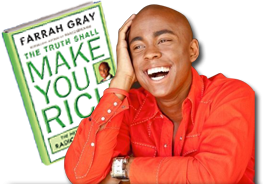 Dr. Farrah Gray was named as one of the most influential Black men in America by the National Urban League’s Urban Influence Magazine. At 21 years old, he was recognized by Ebony Magazine as an entrepreneurial icon, business mogul and best-selling author. Raised in the impoverished South side of Chicago, Dr. Gray defied the odds and became a self-made millionaire by the age of 14. At the age of 21, he became Dr. Farrah Gray, receiving an Honorary Doctorate degree of Humane Letters from Allen University. This was in recognition of his ingenious economic mind and distinguished commitment to the development of values such as leadership, integrity and scholarship. In his rise from poverty to national and international prominence as an entrepreneurial icon and pre-eminent power speaker, Dr. Gray has inspired millions around the world.