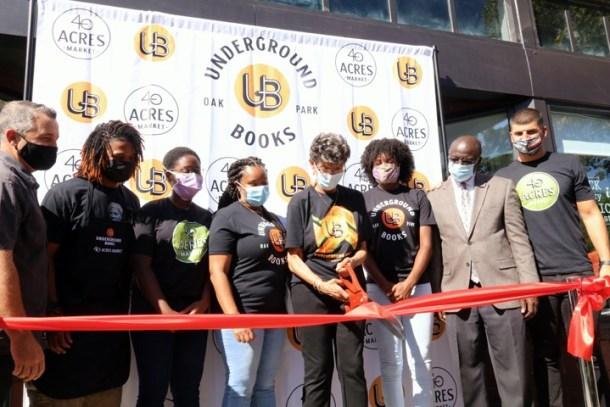 Underground Books celebrated its grand reopening this weekend, highlighted by an official ribbon cutting and tours of Oak Park store’s new look. Located at 2814 35th Street, Underground has new flooring and fixtures and has expanded to include some small grocery items, as the area’s one grocery store, FoodsCo, recently closed its Broadway and Stockton location. The Black books that customers come there for still take center stage. There’s also plenty of “woke” apparel as well.

The bookstore’s remodel coincided with the height of the coronavirus pandemic and a resurgence of social justice activism in the wake of George Floyd and Breonna Taylor’s police-involved deaths.

While closed, customers were able to call in and request books for pickup. “Everything related to race or racism, we can’t keep on the shelves,” Ms. West told The OBSERVER in June.

There was also a mention on Oprahmag.com.

Much has been said about the gentrification of the area, but Underground Books, owned by Ms. West’s son, former mayor Kevin Johnson, has held its own. Today, its blockmates include The Guild Theater and Fixin’s Soul Kitchen, also run through Johnson’s St. Hope organization. The Black-owned pizza joint Slim & Husky’s is another neighbor.

In an effort to be a “literary hub,” Underground Books has featured local authors and hosted nationally recognized writers and leaders in the store and at The Guild ever since opening 17 years ago. The work of Black artist Milton 510 Bowens also graces the walls and has been the focus of art talks there.

“We’ve always tried to bring heart and soul to Oak Park,” Ms. West shared. While Underground Books is celebrating its rebirth, the mood at another local Black bookstore is more somber. After several years of ups and downs, Carol’s Books is closing its doors on Del Paso Boulevard on Nov. 1. A new location has not yet been determined.