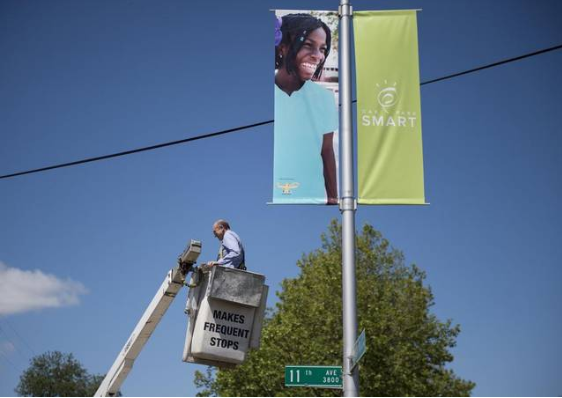 Eighth-grader Araba Cudjoe watched from the sidewalk in front of her Oak Park school Thursday as a banner with her picture was hoisted on a pole high above Martin Luther King Boulevard.

Speaking to a crowd of politicians, principals, parents and students, the 13-year-old at Father Keith B. Kenny K-8 School wore the same shy and wide smile as the one on the banner as she explained it made her feel “special” to be honored. It proved, she said, that success was a matter of hard work after earning a 4.0 grade average and a years-long perfect attendance record.

The banner campaign honoring students is part of a larger effort to make education in Oak Park a neighborhood concern, breaking down traditional barriers between school systems to create a holistic approach to serving kids.

In 2015, Councilman Jay Schenirer’s WayUp nonprofit convinced the principals of 11 neighborhood schools to form a working group that brings them off their campuses and into the community to share resources and address issues like a lack of sports leagues and access to health care.

Oak Ridge Elementary Principal Danny Rolleri said the approach helped him see the needs of kids “beyond just my school” and has helped all of the schools have a way to work together – something that traditionally doesn’t happen.

“How often is there a strip or boulevard like MLK Boulevard that has public, private and charter wanting to get together for the benefit of the whole community?” Rolleri said. “At the root of it, we are all dedicated to the community.”

Schenirer said that Oak Park schools have an image problem based partly on negative stereotypes and partly on real community problems that have plagued the area for years. In the neighborhood’s public schools, the vast majority of kids qualify for subsidized school meals based on low family income, and most campuses predominately educate minority students, some with language barriers.

But Schenirer said the tough realities of the area don’t present an accurate picture of educational outcomes.

“It’s important for people to know what’s being accomplished here,” Schenirer said. “What we are trying to talk about here is that Oak Park students are making regular achievements and it’s every day.”

James Tucker is in his first year serving as principal at Bret Harte Elementary School, and he said the group has been invaluable in helping him understand the neighborhood and access resources. The school is located in Curtis Park, but many of its students live in Oak Park.

“When we get together, we all share the exact same kids,” she said. “It doesn’t matter what school they go to. They share the same community.”

Cervenka said that the collaborative helped her address the emotional needs of students. Last year, the school was “coming off a year where we just didn’t feel the warmth and love on campus.”

Over the summer, she met with Rolleri, who shared his school’s social-emotional learning curriculum with her – something she would not otherwise have had access to. Cervenka implemented it the following year with startling results. Student satisfaction nearly doubled based on a student survey, and disciplinary actions dropped significantly.

“We just noticed how much joy was on our campus,” said Cervenka. “It’s been really beneficial.”

The group has also tackled issues like increasing access to health care by bringing clinics on campus and encouraging parent participation.

Schenirer’s WayUp organization is using a $1 million, three-year grant from Sutter Health to support the program. Sutter gave a seven-figure donation to another councilman’s nonprofit this year when it provided $1.5 million to Mayor Darrell Steinberg’s mental health institute.

Next up for the collaborative is math. The principals have noticed that Oak Park students are often placed in mid- or low-level math classes when they advance to high school, regardless of their abilities. The group is going to try to figure out why that happens and what can be done to support high-achieving math students, and will work collaboratively to document where Oak Park students are placed.

For now, the banners are up and having their effect. Not far from Cudjoe stood Oak Ridge sixth-grader Ahtzihri Vargas, another student featured on the banners.

Her father, Lorenzo Vargas, said he “loved” Oak Ridge Elementary and has sent three daughters there, including one now at Sacramento State. He supported the banner campaign as a way to acknowledge local students.