Oak Park Brewing’s newest is much more than a beer. It’s a Black history lesson The Sacramento Bee 8.28.20 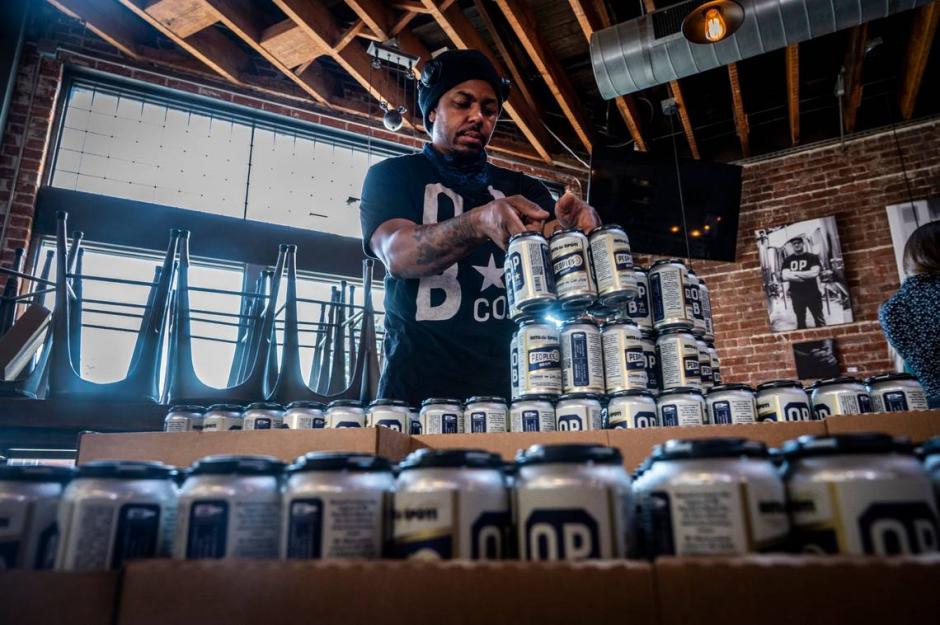 You know the story.

A pint hits the tap at Sacramento’s Oak Park Brewing. The liquid pours straw yellow; the head floating puffy, like a cloud. The first sip tastes like every beer that made Milwaukee famous, especially those from the 1970s heyday of Schlitz, Old Style and Pabst Blue Ribbon.

Oak Park’s People’s Beer, which was canned this week and is being released Friday, is the next liquid chapter that flows from the confluence of the Black Civil Rights movement and the beer-brewing heart of the country.

Go back to 1970, when People’s Brewing Co. was one of the first Black-owned breweries in the U.S. and likely in the world. Oak Park says it was the first ever, but an exhaustive history of People’s Brewing written by Good Beer Hunting says a couple of other breweries were Black-owned before. People’s was owned by Ted Mack, a Civil Rights crusader, an Ohio State football player and an entrepreneur who brought the Black community together to purchase a small brewery in Oshkosh, Wisconsin.

Rodg Little, a Black brewer at Oak Park, is more than a little interested in Civil Rights history. He grew up a few blocks from where the Greensboro sit-in of 1960 became an early success story for the Civil Rights movement.

Little is quick to show off a tattoo on his right forearm that reads “Afro Punk,” from his time in the music scene. As Little grew more involved in the Sacramento beer scene, spending time at Pangaea Bier Cafe in 2007 and meeting homebrew friends through the original owners of Oak Park Brewing, he became absorbed in the story of People’s Brewing.

“We felt there was a story not being told,” Little said. “As a unit, as a team, we’re all about educating, creating, having fun. Diversity. When you come here, that’s your experience. On the education side, every beer has a story and this is what we do.”

SYSTEMIC RACISM IN THE BEER INDUSTRY

People’s story starts in the 1960s, when Mack was an executive at Pabst Blue Ribbon in Milwaukee charged with integrating a production brewery that was almost entirely white in a city roughly 30% Black. Mack had led Civil Rights demonstrations and groups, including leading the Wisconsin delegation in the 1963 March on Washington.

In 1970, Mack got a group of investors together and purchased a small brewery in Oshkosh, a town that’s still 90% white, according to Census data. Rumors were he would fire the employees and replace them with Black workers. A federal contract to produce beer for the military never fermented into cash flow. And by late 1972, People’s was forced to close.

“No matter what you feel about Black Lives Matter, or what you feel about systemic racism, because there will be some who tell you there’s no systemic racism, and usually they’re white,” Mack said. “But I’m gonna tell you the truth, it does exist. It’s why the brewery did not succeed. They blackballed my father in the brewing industry. The simple tactic they had, that’s against the law that they allowed them to do, is squeeze them off the shelf.

“Because, if they allowed him to survive, 30% of Black folks drink beer. And they would drink my father’s beer.”

In 1976, some Wisconsin breweries were fined for a bribery scheme. They were paying shop owners and bars to carry big brands instead of smaller brands. It’s a practice that continues to this day, with a scandal erupting in 2014 in Massachusetts the most recent major example.

Little, the Oak Park brewer, is used to being the only Black guy in a group from his punk rock days. Not much changed when he got into craft beer, a field dominated by white men.

According to the national Brewers Association, minorities are in the single digits and men make up 93% of brewing jobs.

Even 15 years ago, Little didn’t like Coors Light. He was buying Newcastle, Heineken and Guinness before he knew about anything else.

“People used to call me a beer snob, which was crazy,” Little said.

It was through a Sacramento backyard brew day that he met Geoff Scott, who worked at Track 7 until 2018. When the original Oak Park Brewing Co. went out of business in 2018, Geoff Scott and his wife Rebecca Scott were asked if they wanted to run the place. Geoff’s sister, Gwen Scott, became a part-owner along with former Sacramento Mayor Kevin Johnson and restaurateur Dana Huie.

Geoff Scott was going to be the brewer and he needed an equal partner, Little.

It’s easy to see why they’re a potent team. Ask them a simple question — why is diversity important in the beer industry? — and both Scott and Little will turn to food metaphors.

They agree on food metaphors and they agree that brewing a historic Black-owned beer recipe could help change the face of the industry.

“I think the People’s Beer creates opportunity, it creates a platform for us to work on our company goal, mission statement, to be all-inclusive and diverse, a place where people feel comfortable coming and they’re not going to be pushed,” Scott said. “I think this helps us push that message forward because the beer industry can be pretty segmented, and we have one of the only Black brewers in Northern California working here.”

Ted Mack II is obviously thrilled his father’s old beer is making a comeback. A church deacon, Mack delivered a 10-minute oratory on what it was like to talk with Johnson, a former NBA star and Sacramento native.

The call came in early July, shortly after a church group told Mack he would be getting in touch with some surprising people. Mack said he was leery of Johnson at first, making sure to get business deals in place as he began to work with Johnson.

“I like the heart of this man,” Mack said. “And I told my family, because they didn’t trust him. My father got burned many times because he trusted people. They didn’t want me to trust this man, so make sure you got your business side tied up, which I did. But I still trusted the heart of the man. We prayed together, shared some things together and I like his heart.”

With a business deal in place, Mack stood Tuesday in front of a cooler holding “Black is Beautiful,” a beer made famous over the summer by Sacramento native Marcus Baskerville. Baskerville distributed the recipe from his San Antonio brewery, Weathered Souls, and asked brewers nationwide to make it to donate money to support Black causes. Hundreds of brewers joined the call, including Oak Park Brewing.

The beer would have made his dad proud.

“He was one that would stand up to power, no matter what the consequences. We called him ‘The Wild Bull, which he got from football, but he carried it into his professional life. He feared no one,” Mack said.

“This beer is huge to me because when you think about 250 years ago, slaves were doing all of this stuff,” Little said. “So how can you come out of slavery and have a skill set and get pinched out of the market. This means a lot to me. … I want to take (the story) to the highest level possible.”