God And Great People Have Shown Up For Cynthia ‘Cynt’ Marshall 10.24.22 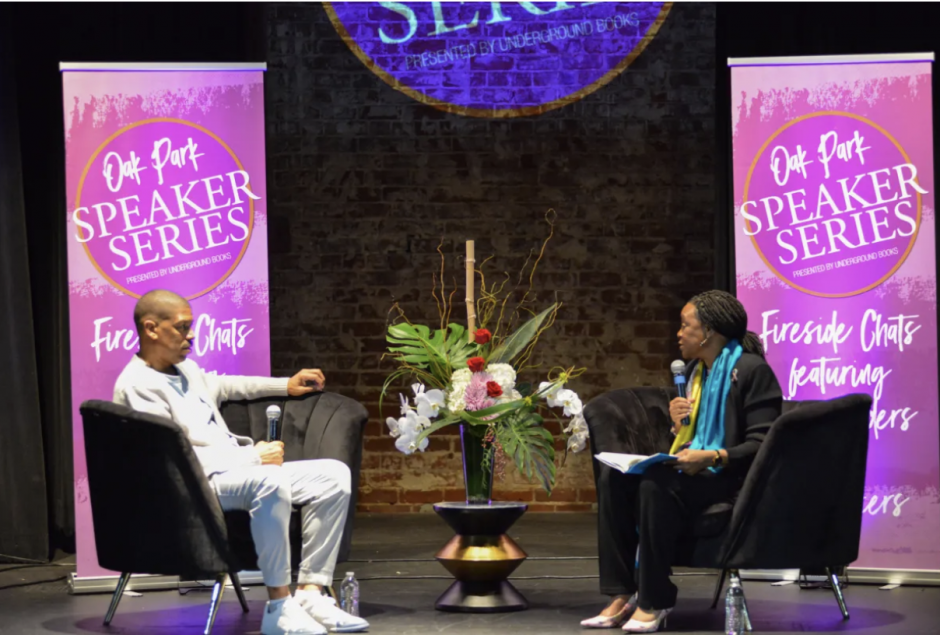 God And Great People Have Shown Up For Cynthia ‘Cynt’ Marshall

The straight-A student was plucked out of the Richmond projects on a full-ride scholarship to UC Berkeley, going on to become one of the first Black female officers at AT&T. She walked with grace through a public battle with colon cancer in 2011, beating the stage-3 diagnosis and living to make history in 2018 when she became the NBA’s first Black female CEO as head of the Dallas Mavericks.

While it may seem the trailblazer is above reproach, Marshall revealed that she too had lessons to learn along the way during the onstage chat with former Sacramento Mayor Kevin Johnson at the Oak Park Speaker Series. The event was presented by Underground Books and drew 150 people to the Guild Theater on Oct. 15.

“Sometimes it’s not what happens – it’s how you respond to what happens,” the 62-year-old said. She described a “painful experience” in the early 1990s where she “didn’t take accountability as a leader,” instead deciding to clap back via email. Another Black colleague had to step in – Chuck Smith, the now-retired president and CEO of AT&T West. He both chastised and taught her that she “didn’t have to prove anything.”

There are many more revelations in her memoir, “You’ve Been Chosen: Thriving Through the Unexpected,” which she said sold more than 2,000 copies in the first week of its September release.

As a proponent of diversity, equity and inclusion, Marshall is a huge supporter of the Black press. The trailblazer carved out time between speaking engagements to speak with The OBSERVER about her new book, surviving cancer, and God’s grace.

This Q&A has been edited for brevity and clarity.

Q: I’m reading your book and it’s fantastic. Memoir is my favorite genre.

A: It wasn’t intended to tell that much. I just wanted to share my cancer journey with people … then the publisher decided there’s more of a story to tell. They knew I didn’t just all of a sudden get that optimistic attitude about battling cancer; [they thought that] probably a lot of things equipped me to fight cancer. The more they talked to me, the more the story started coming out.

Q: Did you always think you’d write a book?

A: No, I never thought I’d write a book. Throughout my [decades-long] career with AT&T, people would say, ‘You need to write a book on leadership or about being a Black woman in corporate America,’ but I always said no. And then [I thought] after I retire, I will write a book called ‘Rebound.’ It’s funny because that was [before surviving cancer and working with the NBA].

Q: Since becoming CEO of the Dallas Mavericks in 2018, you’ve done a lot of work around equity and inclusion. Why is that important in the NBA?

A: I think it goes beyond the NBA. Part of my life’s work is to make sure that we as people — no matter where we work — have policies and practices that are more inclusive because we do better when we have everybody represented. Corporations that are more diverse outperform their peers who [aren’t diverse] because you have more creativity, more innovation, and your reputation as an organization is better. There’s data that supports that, but I’ve lived it. So I wouldn’t limit it to just the NBA. It’s in my DNA.

Q: When you were diagnosed with stage-3 colon cancer in late 2010, you were an AT&T executive with a public-facing job. This may sound like a strange question, but did you feel pressure to beat cancer?

A: I never felt pressure. I always knew I’d get through this. I knew that I was sick enough to die, but I never thought I was going to die. So many people from around the country [were calling] to get updates. So the [public updates about my cancer journey] was just so myself and people around me wouldn’t be burdened with giving updates all the time. But when I first committed to it, [I decided] I wasn’t going to fake it. I’d do one at the beginning of every round of chemo, and they’re going to get the good, the bad, the great and the ugly.

Q: For people who have a loved one battling cancer, what can they do to best be supportive?

A: Here’s what they can do: They can show up – even when the person tells you not to. Whether it’s taking them to chemo or leaving bread on the front porch, just like people did for me. [My friends] all showed up in a very different way. Sometimes they would do something that would make me laugh at a time when I didn’t even realize I needed to laugh; sometimes they would make me cry; and then sometimes they’ll just show up and lay on the couch and just let me lay on the couch. Don’t worry about whether or not it’s appropriate because there’s no recipe for it. Everybody’s battle is different.

Q: Have people been reaching out since your book came out?

A: Oh, yes. It’s overwhelming. And it ranges from people telling me that [they’ve] suffered abuse at the hands of their dad and now they’re getting therapy for it, [to] people who are going through chemotherapy right now. I’ve sent one woman a message back saying I’d go with her to chemo. [The publishers said] I would reach more audiences than just people affected by cancer, and it’s turning out that they’re absolutely right.

Q: You’ve said there’s more to the book than your cancer story. So what’s the book about?

A: The book is about how God and great people have always shown up in my life – that’s it in a nutshell. Whenever I was down, there was a hand to lift me up. Whether it was the hand of my husband picking me up after we buried our daughter, or it was a teacher saying ‘I see that brace on your nose from when your dad broke it, but you’re going to college, girl,’ or it was my AT&T family saying, ‘We got you,’ it’s about being there for each other. My theme song in life is “Ain’t No Mountain High Enough.” “If you need me, call me, no matter where you are, no matter how far – don’t worry, I’ll be there in a hurry.” That’s truly what life is about. So can we say that to each other?