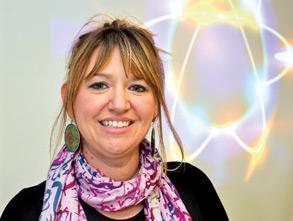 Domina Stamas has a question for her ninth-grade science students at Sac High: How would you make Mars a sustainable living space for humans? It’s a tall order, but with a wild payoff. When the school year ends, her kids will be presenting their best models to the NASA scientists working to get an American on the red planet by the 2030s. It’s not your everyday biology unit. But, then, Stamas isn’t your everyday teacher.

I don’t have a lot of astronauts in my contact list. How did you end up working with NASA?

Facebook. Social media. I just got super-stoked, and I said, “Oh my gosh, my VP said that I could do this project. I’m so excited I’m going to be teaching my students about [Mars].” And a friend of mine said, “Hey, I have a cousin who works for NASA, and I think he’s on the Mars project.” And I was like, “Sweet.” So she said, “Let me get you in touch with him.” … So then he friend-requested me on Facebook. Next thing I know, I’m talking to eight different astrobiologists from NASA all over the country.

What is it about Mars or about space that appeals to kids so much?

What is the appeal to anybody? It’s just the unknown, it’s like sci-fi. You can’t touch it. Is it real, is it not? They’ve learned about planets since kindergarten, and now we’ve got the opportunity to go to one, so it makes it real. And then when they start to learn that maybe we can go there. … It’s kind of cool, when I first introduced this to them last term, almost all of them were like, “That’s the stupidest idea ever! That’s so stupid!” But now, when you have these conversations with them, they’re just so open to the idea. They’re making it personal, they’re building something around the concept, and they’re making it about them because they’re creating their own plan on how they would live and survive on Mars. I don’t think it’s a kid interest—I think it’s a human interest.

Hit me with a cool Mars fact.

Well, they believe that Mars once was Earth-like at one point. There is some evidence, and they are exploring that evidence right now. They believe that there was no magnetic field [on the planet] and the atmosphere blew away through solar radiation. And so the cool thing is, here is a planet that was probably very similar to ours, and because it didn’t have a magnetic field like ours does, it couldn’t sustain those solar winds.

You make women in STEM a priority. How do you think we can get more women into the sciences?

I think inspiration. What I do in my class, I have groups that are named by scientist. So I have a mixture. I have Mae Jemison—she was the first African-American woman in space. And then I have Marie Daly—she was the first African-American chemist. So I have their team names named after scientists, and I have their pictures up on the wall, because I believe that if people are seeing people doing what they’re doing, then that’s where the inspiration comes from.

You can see yourself in someone that looks like you.

That’s great that you’re opening them for your students.

I hope so! That would be cool if one of my students ended up a scientist.

Mercury. It’s just too hot. It’s little. And it goes around the sun way too fast—it’s just like 88 days.

Talk to me a little bit about how evolution and coevolution tie into research on creating a living space on Mars.

Coevolution is when two things change and they kind of evolve at the same time, so they kind of rely on each other. So when Earth[’s atmosphere] changes, life changes, and there’s evidence to support that. When Earth started to cool down, the water vapors started to accumulate, and then we had liquid. And then we had all these little tiny organisms starting to form, and they were photosynthetic. So we didn’t have complex organisms like plants. But these little photosynthetic organisms started to release oxygen into the air, and these living things literally changed our planet. Once all that oxygen started going into the atmosphere, it paved the way for other, more complex organisms to move out of the water.

So you talk to them about making Mars a habitable place by using Earth as a model.

Yes. There’s no way for us to understand Mars unless we understand what’s going on on our own planet. One of the things they have to learn about is growing food, so what they did in the beginning of all this, they actually created a greenhouse and they grew their own food and they planted in the garden. My thing is, how are you going to come up with a plan on growing food on Mars, if you don’t know how to grow food on Earth?